What is bypass oil filtration? 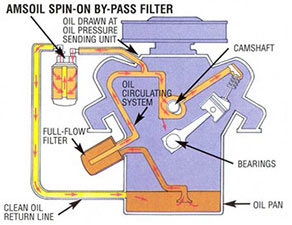 Bypass oil filtration introduces a high-capacity secondary filter to an engine's lubrication cycle that is designed to eliminate nearly all contaminants in the oil.

During normal engine operation tiny airborne dirt and internally-generated metal particles elude even the most efficient full-flow oil filters. Wear particles can reduce fuel efficiency through a variety of scenarios.

How does the bypass oil filter system work?

What is Anti-wear Additive Depletion?

Anti-wear additives guard against metal-to-metal contact if a full lubricating film either does not develop or ruptures. These instances may occur at start-up or during periods of heavy load, especially in the contact areas between cam lobes and lifters, and piston rings and cylinder liners.

In diesel applications high wear particle levels in the oil can impair the performance of the zinc anti-wear additives. Some industry research suggests that soot and dust particles display polar absorbencies that can "tie-up" anti-wear additives, hindering their ability to control friction, which leads to reduced fuel efficiency.

How is Energy Lost to Friction?

Under normal engine operation, some of the energy created during the combustion process is lost to friction however; when wear particles breech the clearance between moving parts and rupture the oil film, friction worsens. The problem especially affects the piston ring/cylinder wall contact areas where the oil film can be as thin as three-microns.

Particles can agglomerate with soot and sludge to create deposits in the microscopic clearances between valves and guides. Called stiction, the process interferes with the timing of the port openings and closings, causing incomplete combustion and power loss. Stiction can lead to burned valve seats and reduced fuel efficiency.

By filtering oil on a "partial-flow" basis, AMSOIL Ea ByPass Oil Filters draw approximately 10 percent of the oil pump's capacity at any one time and trap the extremely small, wear-causing contaminants that full-flow filters can't remove, including 98.7 percent of wear particles two microns and larger (ISO 4548-21).

AMSOIL ByPass Filtration Systems have a high pressure differential, causing the oil to flow through the by-pass filter very slowly and allowing for the removal of up to 30 percent of soot contaminants less than one micron (ISO 23556).

Micron: A micron is an SI (metric) unit of length equaling one-millionth of a meter. A human hair is approximately 70 microns although a hair can range from 40 – 300 microns. The human eye can see particles as small as 25 microns (a speck of dust).

Oxidation: Oxidation occurs when oxygen attacks fluids. The process is accelerated by heat, light, metal catalysts, and the presence of water, acids, or solid contaminants. Oxidation leads to increased viscosity and deposit formation (varnish & sludge). In a nutshell, you want to minimize oxidation in your engine oil.

Blow-by: Blow-by is a situation that occurs during the combustion process in an internal-combustion engine where those sneaky combustion by-products and contaminants slip past the piston rings-to-cylinder liner interface and end up in your crankcase (and your oil).

Nanofiber: Generally speaking, a fiber under 1 micron in diameter is a nanofiber (see Micron above).